Millie and Molly is a retro inspired puzzle game coded and designed by industry veterans for original Commodore 64 hardware and emulators. We teamed up with the most talented people in the C64 scene including Saul Cross for the graphics and Hasse Axelsson-Svala for the music.

The game features 100 original levels spread over five themed worlds, eight pieces of music and even a level editor should you wish to get your creative juices flowing. The game works on both PAL and NTSC formats.

Messed up a level? In possibly a first for a C64 game you can rewind time so you can fix your mistakes.

The downloadable file features the game in .d64, .t64 and .prg formats.

FIX: Defect on level 88 if a certain move is made
CHANGE: PAL wipe effect made faster
CHANGE: Colours on level complete screen changed for better contrast
CHANGE: Rewind effect stops if you reach the start of the buffer

In order to download this Commodore 64 game you must purchase it at or above the minimum price of $1.99 USD. You will get access to the following files:

A couple of years ago. Bitmapsift did tape and disk versions and Beaver of the Black River did a cartridge version. Both were lovely packages.

MANY THANKS for the reply wasn't aware of a cart version :)

Hi, how did you release it for the Switch? Did you make it from the scratch with something like Unity? Ty.

Hi. Yes I rewrote the game in Unity so I could publish smartphone versions. Thalamus then got in touch and made the Switch version from that code.

Can the levels created with the level editor be saved as a separate game, or are they loaded into the main game as additional levels?

You can only play them in the level editor itself.  Each save file contains up to 20 levels though.

A very good surprise ! A smart and intelligent puzzle game. I played the levels with an obvious pleasure, each new gameplay element is introduced and explained by the game itself with a lot of logic. No need for a one hour tutorial to understand ^^ ! Well done !

Thanks, glad you’re enjoying it.

Just bought this and am yet to play it, can I grab the Android APK somehow? Looks just like the sort of game I'd love on my mobile :)

Thanks. Sorry the Android version was removed from the Play Store by Google. I’ve just released a Switch version if that’s of interest.

That's alright, was just following up on the mention of the apk from earlier in the comments. An Android version would still be great for me to play while waiting in line at the supermarket (or in meetings haha) but I'll definitely check out the Switch version too!

Just got into this again on my 64. Was going on a trip and thought I'd get the android version to keep working on the puzzles, but appears it is no longer available?

yeah, sorry about that. Because I closed  my website they took me off the Play Store due to lack of a privacy policy. If you can install APKs I can send it to you for free.

Can't you upload the Android App here on itch.io, or somewhere else? I was looking for it, too.

I don't know, I'll have to look into that. Thanks.

I found this gem on Antstream, it is so incredibly brilliant, I love it. I think I will need to obtain also a C64 physical version if still available somewhere.

Thanks, that's really kind. The disk version is sold out but you can get tape here:
https://www.bitmapsoft.co.uk/product/millie-and-molly-tape/

Thank you! The puzzles were designed by my friend Chun Wah Kong, he was a lead designer for Sony on The Getaway so he's got form!

Thanks, I didn’t know that. I don’t have the annual.

I'm really satisfied with that game. Thank you :)

If anyone is interested: I created a printable password sheet for Millie & Molly. If printed in landscape with two pages on one, this PDF will result in five DIN A5 papers that you can use to write down your level passwords for all 100 levels. Enjoy!

Carleton, if you read this: In case you like it you may include this file in your downloadable archives - no attribution required.

Carleton,  how does the password system work?  Is there a table of passwords you populate with random strings that correlate to a level, or is there an algorithm involved that correlates the string to a level?

I have a pseudo random number generator. So by seeding that with a set value I can generate the same 100 passwords each time.

Thank you - printed and being used :)

Your game looks great, the art style kind of reminds me of the original metal gear, anyways, great job! Are you interested in a co-op bundle? I recently finished an update for my game ([DIS] Assemble) and we are making a pre black friday bundle with another art asset pack

Awesome game, finished with great pleasure. Only encountered one visual glitch during my playthrough. Hopefully we'll see more games from the developer in the future.

Thanks, glad you enjoyed it.

What was the glitch?

That was in the last 20 or so levels, the one with two "triangles", one on the left with the largest part on top and one on the right with the largest part at the bottom. Digging a dirt block on the left made one block from the top fall through and get stuck at the bottom on the screen, visually only, but it still made its whole column invisible until I interacted with it again. That particular glitch was repeatable every time.

I might add that I was playing on Android with C64.emu, which may not have helped. Unfortunately I haven't saved the code for that particular level, so I can't reproduce or send any screenshot.

EDIT - Ah, reading the comments, it seems to be the very same bug as the other player pointed out. Level 88, thus, same actions, same results. ;)

Yeah, sorry that bug was found after release. It is fixed in version 1.1 which is downloadable if you bought the original.

Nice puzzle game. Instead of a password system a save file would be nice. The rewind feature is great. Love the look of the game.

Hello, I've purchased the game a few months ago, but wanted to try it only today... It asks me for a password, but I can't find it in the readme file :-\

Hi Brady, thanks for playing.

The passwords are only required to record your progress through the game. Starting without entering one will begin the game at level one. Sorry for the confusion.

Sorry read just now, I didn't investigate enough, I run to play your game then, thanks!

I got the physical copy. Was great game and I am looking forward to seeing more of what you are bringing out with no cancelled games lol

Haha, thanks. Search for Behemoth on Games The Weren't for my cancelled C64 project from 1990 or so.

I like the game! However I think we are missing out on a nice opportunity for two player coop fun without a two joystick alternative... A two player cooperative puzzle game where the players alternate controlling a character can be fun and relaxing (see Eskimo Bob on the NES)....

We had to leave something for the sequel ;)

Finished this, great little game, some of the levels were a real challenge, but always do-able, and that rewind feature really does remove any hint of frustration. Top notch stuff.

I had the pleasure of reviewing this game for our magazine.

Just picked up this magazine, looks like a good read, looking forward to it, thanks for putting up the link👍

Looks interesting. How is it 5 Euro for delivery of a PDF version?

As far as I remember I had to change the delivery region from Europe to digital pickup to get rid of that €5 delivery!

Yeah, Chun said similar but even that option was hidden. A little work needed on the web UI I think  but the magazine is really good.

Absolutely love this game, just need to get my slow brain past level 30 now!

I tried this game on my stream last night, thinking at first that this would not be something for me. And I was wrong - this was a brilliant game and I had a ton of fun with it. Will purchase the physical release as well.

Thanks for playing, I enjoyed watching your stream. It's interesting seeing which levels people struggle with.

Finally got around to playing, congratulations on a fine game sir.

Brilliant little puzzle game, that provided hours of fun. Some later puzzles are quite challenging too.

I found a little bug in level 88. After eating the clam and digging through the dirt on the second lowest row left to the stairs, the column left to Millie collapses:

The column is still there, even though it seems to disappear. You must exit and re-enter the level to get the graphics looking proper again.

Not a huge issue though, as this is a stupid move anyway. :) But thought it is worth mentioning, in case it can happen in some other levels too.

Great find. I wasn’t aware of any bugs. I’ll fix this for the physical release and do an update version.

I've fixed this bug by the way. I'd incorrectly assumed the maximum number of items which could fall in any one turn was 7. That layout has allowed you to drop 8 items so it overflowed the memory I'd allocated. You could actually build a situation in the level editor to drop 13 items at once I now realise.

I loved this game, I bought it yesterday and finished it today.  Please make more games!  But...  it still has the level 88 bug in it.  Also, I was wondering if we could get the TAP file in the digital download too?  It would be nice!

Finished in a day? Wow!

Sorry about the bug, it is fixed in the deluxe version. I’ll release a new build on here this week.

By tap do you mean toy want the loading screen and tunes etc.? I don’t really have access to those assets, they’re the publishers.

Yes, I did the first 80 levels in the first night, then did the last 20 the next day!

Great news to hear that the bug is being fixed.  Yes, I meant the full tape-loading experience.  It's a shame to miss it, but I understand.

A very clever, creative and pleasant game! The rewind-option is a great idea and perfectly executed. Thank you for such a motivating and unique puzzle experience!

I bought it just because of music.

Great game! I bought it and enjoyed playing it very much... Cheers from Holland!

Really love it! Game, music, design, waiting for your next game!

Is this a one file .prg? I use RR-Net to transfer games over codenet so I can only play those, so just making sure.

Kerching... purchase made. Looking forward to playing this. Thank you for all the work put in to this. :)

I'm really loving this! Thank you for making this beautiful "little" gem! It's perfect for young and old.

I would buy it but the thing is stuck on 5 dollars not three.

3$... 5$ ... frankly it's just nothing for all the time which has been spent writing efficient code and designing a strong gameplay and shining grapfix ;)

I would have paid ten times the price, because this game finally got my gf hooked on the little computer ;)

well, only you record all games as you go, not the ones you like. :/ 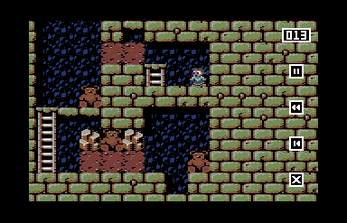 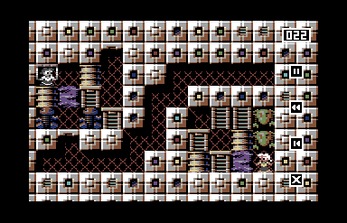 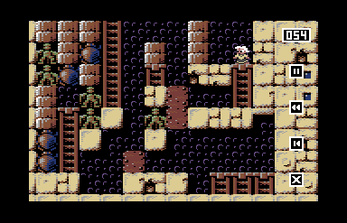 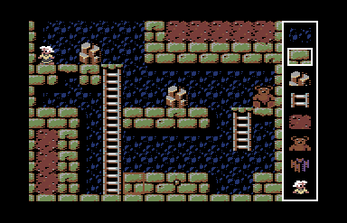